I can typically live my day-to-day life now without thinking about it. It happened in two different contexts over the course of ten years, but I’m nearly 25 years beyond the last of it now … Thanks to the recent media coverage of Ray Rice’s violent abuse of Janay Palmer caught on tape in a casino elevator, and all the commentary that followed, I have been clearly reminded.

Up to 7 out of 10 women around the world experience some form of physical or sexual abuse at some point in a lifetime according to the UN’s UNiTE campaign website. For 1 out of 4, it happens during pregnancy. 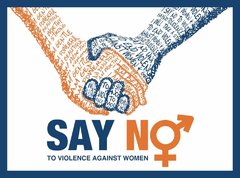 What’s strange is that, even though I am within that 70% of women, it isn’t something I know to be true about any of the women in my various circles of friends. That doesn’t make me question the statistic, though.

Women don’t talk about their experiences of abuse for lots of reasons. We can’t figure out why it happens – what makes him snap – and we conclude that he is right about it being our fault. Maybe I am too mouthy and I should have just kept quiet. Maybe I was wrong to question him that way about his drinking…

After all, he’s such a great guy most of the time. No one would ever believe me if I told the truth about what really happens.

There is such an insane degree of inner conflict that goes along with abuse that it almost always requires intervention from someone outside the cycle in order to convince a victim to leave or an abuser to seek rehabilitation. Add to that the social barriers of the abuser being a powerful or well-loved leader in religious, business or political circles and you’re looking at a situation that is nearly impenetrable.

The most maddening realization is that the heart of the reason we as women don’t talk about violence against us is because we have been conditioned to believe it’s ok. We don’t really see abuse against women as a crime. We see it more as … boys being boys. Excessive behavior. When we buy the idea that abuse happens because we make a man angry or we shouldn’t have worn a certain shirt or pair of pants, we buy it because it restores a sense of power that is lost to us in the abuse. It’s easier to believe that I had the power to make that happen than it is to believe that I had no power to either cause it or to stop it. Even though it’s a ridiculous preference, it seems to be the one we often choose by default. At least, until we can conjure the power to walk away.

And, since the power to walk away can require Herculean effort all by itself and gives us the greater relief that we seek, we may never find the power or support from the police or the legal system to take the next step and file criminal charges against our abuser(s.) In stopping short here, we as women actually encourage the belief that abuse against us is not criminal behavior. Most of the time, however, this is another form of victimization, requiring an outside advocate in order to bring abuse to full closure.

Hundreds of millions of women around the world live in countries where domestic violence is not considered a crime. This isn’t one of those countries, but it remains an issue as long as women are discouraged and unsupported when it comes to bringing an abuser to justice.